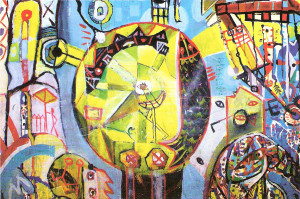 “I will remember the year 1984 as an unrepeatable year of spontaneously concentrated spiritual energy focused in one point called 0 = ZERO.
From this zero-point, informally began the underground of the Macedonian art. Gathered around the tea store “Gallery 7”, the members of the group “Zero” performed a series of actions outside of Skopje too. Round them began to rotate numerous Macedonian intellectuals from different spheres, and for a short period of time two American authors as well, Sam Hernandez, a sculptor and the theorist Michael Sporer. The members of the group made their five most intensive years in their creative work, historically unforgettable concerning the spiritual life of Skopje. To this date such exchange of creative energy has not happened. Due to their division, Skopje lost its spiritual aura … ”
Koncha Pirkoska

1984
– Proto-zero performance When the frogs die, House of Youth, Shtip

Portrait of a youth
25 years of the informal group “Zero”

Writing about an event after 25 years of its first appearance (the first performance of the group in Shtip) is a challenge and a responsibility, it arouses a feeling of restlessness; however, this problem has already been addressed. According to Goethe Great is the pleasure to roam with the spirit of Time” while Gottfried Benn wonders “whether memory is a fundamental category of the visual arts and its history?”.

My attempt for a reconstruction of a certain period is based on facts (art works and other materials, photographs and texts) as well as a nostalgic reminiscence. It was a time of sincerity and creative action, with a sense of profound romanticism of energy in which I took part as well.
A zero, two zeros, null, the first generation at the Faculty of Fine Arts in Skopje (founded in 1980) are imprecise but nevertheless useful terms which refers to a group of artists with diverse interests. As a group “Zero” will appear at the exhibition of young artists -Expression, Gesture, Action” organised in 1985. The name derived from a collective spontaneous witty play of words: “zero” meant a number – countless, our nothingness in the core (later other more complex meanings were revealed, for example that for the Mayan civilisation the Zero was the great myth of cyclic renewal, Zero is an interval of a generation). The close circle of artists gathered during their studies would install the visual elements in a given space in a uniquely lively manner, introducing a variety of effects and sensations, symbolic meanings where objects, light, music and movement meet and interweave. “Live” actions were performed at openings of exhibitions instead of the conventional “speech” in front of an audience. They remarkably announced their route towards multimedia research and experiments based on the sensibility of fragmented impressions as well as the necessity of an eclectic and (neo)expressionistic way to fuse a series of modernist inventions of collage, assemblage, performance with a special interest in the elements of comics, graffiti, poster art and other phenomena of trivial culture including photography, video and film, means of expression that otherwise have no significant success in Macedonia despite a few achievements worth mentioning. These “technical images” (Wilhelm Flusser) became part of their spontaneously designed and premeditated artistic language and expression which contained elements of a post-modern sensibility in a lyrically suggestive manner. It was this which emphasised the turning point of a genuine revolt and provocation against the established aesthetic practice and local art criteria in the area. Critics, especially the ones from the Museums, were taken aback and assumed an extremely distanced and reserved position while the public and the press showed a greater interest. Only later would the group “Zero” gain full support through the individual affirmation of its authors. Indeed, at that time nothing more could have been expected due to strictly established rules of taste and views. It is probable that these young, wild, rebellious and unadjusted seemed to somebody a it too direct and loud with their raw expression and restless spirit. This condition derived from the challenges of the new era, the existential drama that pressed humanity on a local and global scale.